In this activity, we will use the G-force detection capabilities of a standard smartphone. The accelerometer in a phone uses a small silicon chip and detects, using capacitors, the motion of this chip relative to the housing of the phone. This allows the phone to know what orientation the phone is in relative to the surface of the Earth, and change the orientation of the phone's display accordingly. It also allows some fun with physics!

A free app called Physics Toolbox by Vieyra Software takes data from the phone's accelerometer and graphs it over time. With this data made available using the average smartphone, a wide range of exploration and experimentation are now possible with a device that most students habitually carry around in their pocket.

For this activity, we'll use the Physics Toolbox interface to have some fun with orientation and movement in space.

1. In the reference frame of the phone, which direction corresponds to which Cartesian component? For example, does the top of the phone point in the positive or negative x, y, or z-component? Does this change if the phone is rotated?

2. Can you make your graph look something like this picture? (Include only the green and blue line in the Physics Toolbox display)

Here are some labs where the primary data collection and recording are done using Physics Toolbox, made available on www.vieyrasoftware.net:

“Identifying Gait Metrics”
"Exploring Three-Component Seismic Data with Accelerometers"
"How Hard Does the Ground Shake During an Earthquake?"
“Measuring height in an Elevator ride” 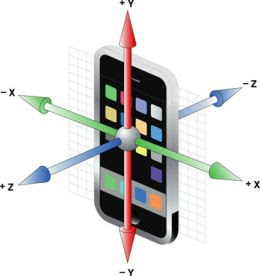 A non-exhaustive list of mobile apps that enable smartphones and tablets to become scientific instruments.

Physics Toolbox
"Useful for education, academia, and industry, this app uses device sensor inputs to collect, record, and export data. in comma separated value (csv) format through a .txt file sent via an e-mail or through Google Drive. All analog data is plotted against elapsed time (or clock time) on a graph. Users can export the data for further analysis in a spreadsheet or plotting tool. The app also allows for a tone generator output. A menu allows the user to swap out sensor data collection between the following data sensors: 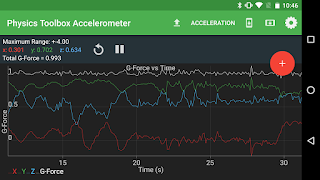 Audio Kit
"Audio Kit is a collection of four tools which are essential for those working in audio, sound and music. A real time Spectrum Analyser, a Scope to display waveforms, an SPL (Sound Pressure Level) Meter, and a Signal Generator producing sine waves, white noise and pink noise."

Acoustic Ruler Pro
"Wouldn't it be amazing to have a ruler in your pocket all the time? Well now you can! Measure distances of up to 25 meters (82 feet) with two devices or up to 1.10 meters with one device and headphones.

The app works by clocking the time delay of the emitted sound waves. There are two different operation modes: a single device operation (with headphones) and a dual device mode for measuring the distance *between* two devices."

AndroSensor
"AndroSensor is the absolute all-in-one diagnostic tool that lets you know virtually everything about your device's status.
AndroSensor supports all the sensors an android device can have and it will tell you which of them are not supported by your hardware.
View in a single screen the data from all device's sensors in real time. Graphical and text output available for each sensor (graphs are not available for proximity, location and battery info).
- location, location provider, accuracy, altitude, speed and GPS NMEA data.
- Google maps to show the above info. Tapping on your location shows your address, postal code and location accuracy (if available)
- accelerometer readings, (incl. linear acceleration and gravity sensors)
- gyroscope readings,
- light sensor value,
- ambient magnetic field values,
- device orientation
- proximity sensor readings
- pressure sensor (barometer)
- relative humidity sensor
- temperature readings
- battery status, voltage, temperature and health
- sound level meter (decibel)
- If your device supports it, next to the sensor's name, you will see how much power the sensor consumes per hour in mA.
AndroSensor also allows you to record everything from your sensors into a CSV file."

RadioactivityCounter
"This is a real working radioactivity counter. You only need a BLACK TAPE to cover the lense...
The App is using the camera sensor to detect radiation, like a geiger mueller counter, of course with a smaller area. We tested several mobile phones at the Helmholtz research facility in Munich, using a professional radiation device in the range of 2-10 µGy/h till 1-10 Gy/h (CS137 and CO60). The CMOS sensors can detect primary gamma radiation and some higher beta radiation (depends on the shieldings in the mobile phone). Typically not going into saturation as most GM tubes"
Posted by Unknown at 9:48 AM 1 comment:

What follows is a list of papers outlining Physics labs and activities that are possible using mobile devices as primary data collection tools with the appropriate app installed. The app listed under the paper is the one mentioned by the paper's authors, but many other apps might enable the same functionality. A list of apps is compiled in another blog post.

Jochen Kuhn from Kaiserlautern University of Technology and Patrik Vogt from the University of Education Freiburg have paved the way with their blog, iPhysicsLabs in The Physics Teacher. They have written many of these papers and their contribution to the world of Smartphone Physics is appreciated.

Using iPads to illustrate the impulse-momentum relationship
Jefferson W. Streepey
Phys. Teach. 51, 54 (2013); http://dx.doi.org/10.1119/1.4772044
Students use the accelerometer in an iPad to see that it is not the peak value of acceleration, but the size of the impulse that affects movement. App used: SparkVUE


Kinematics with the assistance of smartphones: Measuring data via GPS - Visualizing data with Google Earth
Patrik Gabriel and Udo Backhaus
Phys. Teach. 51, 246 (2013); http://dx.doi.org/10.1119/1.4795375
In combination with a phone’s built-in GPS receiver and Google Earth, especially the elevation profiles provided by the latter, kinematics values can be taken for motion over long distances. An example is given of a longboarding descent, comparing speed changes to elevation changes. Apps used: Google Earth, built-in GPS apps


Acoustic measurements of bouncing balls and the determination of gravitational acceleration
Oliver Schwarz, Patrik Vogt and Jochen Kuhn
Phys. Teach. 51, 312 (2013); http://dx.doi.org/10.1119/1.4801369
The audio of a ball bouncing is recorded. The change in energy of the noise for each successive bounce is used to infer the coefficient of restitution of the ball. Using this, and the time between bounces, it is possible to obtain acceleration due to gravity. Apps used: Oscilloscope, or alternatively, Audacity


Angular momentum
Asif Shakur and Taylor Sinatra
Phys. Teach. 51, 564 (2013); http://dx.doi.org/10.1119/1.4830076
The gyroscope in a smartphone records data as the phone spins along with a rotating platform. A weight is dropped on the platform and the data is analyzed with reference to angular momentum and rotational kinetic energy. App used: xSensor


Analyzing elevator Oscillation with the smartphone acceleration sensors
Jochen Kuhn, Patrik Vogt and Andreas Müller
Phys. Teach. 52, 55 (2014); http://dx.doi.org/10.1119/1.4849161
The side-to-side motion of an elevator is recorded and compared to the estimated length of the elevator cable, modeling the elevator as a pendulum. App used: SPARKvue or Accelogger


iPad & Weightlessness
Nadji, Taoufik
Phys. Teach. 50, 307 (2012);     10.1119/1.3703551
The instructor drops an iPad from the top of a stairwell, and students catch it two flights below using a blanket. The concept of zero acceleration is explored, with attention given to reference frames. App used: AccelGraph


Hockey, iPads, and Projectile Motion in a Physics Classroom
Richard P. Hechter;
Phys. Teach. 51, 346 (2013); 10.1119/1.4818370
Students stage and film the shooting of a hockey puck. It is modeled as a projectile and LoggerPro video analysis is performed. App used: LoggerPro
Analyzing Oscillations of a Rolling Cart Using Smartphones and Tablets
Sándor Egri and Lóránt Szabó
Phys. Teach. 53, 162 (2015); http://dx.doi.org/10.1119/1.4908086
A cart is attached to springs on either side and allowed to oscillate as governed by Hooke’s law. A smartphone is fixed to the cart and records the acceleration data. App used: a program developed by the authors. However, any accelerometer app will work


Smartphone astronomy
Marcus Meißner and Hendrik Haertig
Phys. Teach. 52, 440 (2014); http://dx.doi.org/10.1119/1.4895369
The International Space Station can be filmed using the camera in a smartphone. Based on how long the ISS is in view, its orbital speed can be calculated. It is also possible to estimate the height of the ISS above the surface of the Earth. App used: Built in camera

Exploring G-force with Physics Toolbox
Of my design, this activity is a quick introduction to get students used to the accelerometer app and  the reference frame of the phone. 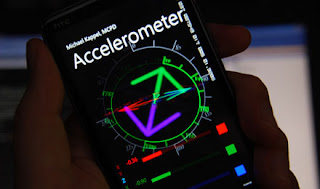